The photograph was taken at an even rarer Sunday training session and shows the undoubted high spirits within the team.

(Several players were missing from the training session due to it being on a Sunday either through work or family commitments).

February 1978, Blyth Spartans AFC had already captured the nations hearts by reaching the Fifth Round of the FA Cup and in holding Third Division Wrexham to a 1-1 draw at the Racecourse Ground the name of Blyth Spartans had made it into the hat for the Quarter Final draw.

The unjust nature of the last gasp Wrexham equaliser was plain for all to see with the game being the feature game on Match of the Day and the nation were backing the club to right a wrong in the replay, but the Quarter Final draw had cranked up the hype even more with the winners being drawn at home to Arsenal !.

Third Division Wrexham were flying and having already held a struggling Newcastle United to a 2-2 draw in a Fourth Round at St James Park and then easily beating them 4-1 in replay the Newcastle fans wanted revenge and the game had been switched to St James Park such was the interest.

National & local news papers had flocked to Croft Park for any news worthy story they could get from Blyth’s miners, school teachers & painters & decorators. 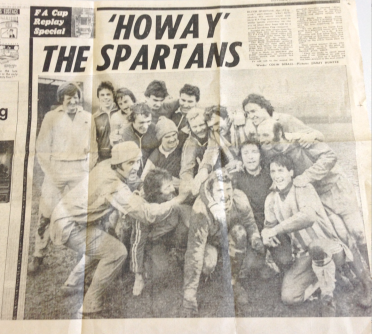 On the morning of the replay,
Monday 27th February 1978,
national newspaper the
Daily Mirror ran an
‘FA Cup Replay Special’
in its centre spread (pages 14&15) entitled
‘HOWAY’ THE SPARTANS.

Sports writer Colin Diball & his photographer Jimmy Hunter had attended a training session on the Sunday and the feature read as follows:

(all spelling & hyphenations are as per the original article)

Blyth Spartans £7-a-week part-timers who have shaken the soccer world with their FA Cup successes, were in blithe spirit yesterday on the eve of what they hope will be a record breaking Cup contest.

Tonight the little giants from the North East take on Wrexham in the FA Cup fifth round replay and victory would make them the first non-League club to reach the quarter finals in modern times.

The Blyth bombshells, pictured getting into the right spirit with coach Jack Marks, are expecting a 40,000 plus crowd at St James’s Park. home of Newcastle.

That is likely to be DOUBLE the 22,000 attendance at Newcastle’s League match with Ipswich last Saturday.

To add salt to the wound disgrunt’ed Geordies chanted “Bring on the Spartans” as Newcastle dropped to the foot of the First Division and almost certain relegation.

And Blyth boss Brian Slane rubbed it in after a training session yesterday when he pledged: “We’ll give the fans something to shout about.

“We are playing for North East pride in a depressed soccer area and we won’t let anybody down. Wrexham will find when they turn out against Blyth Spartans-they’ll be taking on the entire North East as well.”

The school teacher Slane, who took his players on to the pitch to a standing ovation before the Ipswich game added:

“They are ready to sweat blood-and I am confident we will get through . . . just as I believe we can beat Arsenal in the next round.”

Other interesting items on the pages really show how times have changed since February 1978.

The offer was ‘If you placed a firm order for a new Morris Marina before the end of March 1978, you can enter our Centennial Competition.’

The tag line on the bottom of the advert stated that the Brand new Marina was on sale at prices from £537.73p including car tax, VAT and something that really showed the times …front seat belts !!! but delivery and number plates were extra !.

Looking back at old newspapers is a fascinating way to see how times have changed both in sporting world and life in general.

• In 1978 Blyth Spartans AFC were paying some of it’s best and arguably its most famous   players £7 per week. One player, Ron Guthrie, had 5 years earlier played in and won the 1973 FA Cup Final with Sunderland.

• Flash forward to 2012 and you now get players, who aren’t even good enough to ‘lace those players boots’ wanting £100’s play and if they don’t get it they will just go play for whom ever pays the most ….

….how times have changed !.

The ramblings of a Millwall fan

News, Reviews & Interviews with the biggest names in Non-League throughout the North West.

Over the Wall Blog

I fancy O'Brien over the wall

The Musings of a Football Obsessed, Cycling Lawyer

The football adventures of Peter Miles

The Ball is Round

The Ball is Square
The WordPress.com Blog

The latest news on WordPress.com and the WordPress community.