September 1999, John Gamble quits as manager after a 0-3 defeat at Lancaster City, into the hot seat came a familiar face for his first spell as manager, Mick Tait. 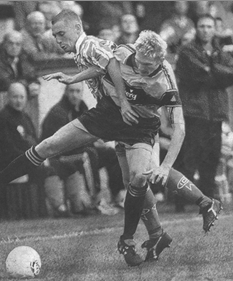 This was his 1st team photo taken on 9th October 1999 before the 3-0 home FA Trophy 1st Round victory against Stourbridge.
It was actually Mick Tait’s 3rd game in charge having taking over from John Gamble after the popular former Blyth defender had resigned following a year in charge. John stated he thought he had taken the club as far as he could and felt it best to stand down now so the new manager had a good chance to reverse the poor start to the season, John even suggested managers as he replacement (one being the former Hartlepool United manager Mick Tait).

Upon taking the job Mick Tait commented:
“I was contacted by the club after John had resigned, they asked if I was interested in the job. I had heard John had resigned and had thought of contacting the club to see if I could help in the short-term. I had been waiting to get back into League football but when Blyth approached me I decided I was happy to get involved with football at this level”.
“The club is very well run I have watched games at Blyth on a number of occasions and it has always seemed a very good Non League club.”
“The club didn’t set any specific targets but they are a very ambitious club and have told me that they want to be playing Conference football within a few seasons”.

1999 had been the club’s Centenary year so 1999/2000 was deemed the club Centenary Season with several events held to mark it (however the events on the pitch were to prove not as successful).

The club had a new Centenary badge designed (created by Newcastle based Kimmerton Design) and it adorned the new kit for the season.

It was a slight ‘tweak’ of the previous ICIS kit, having a more prominent sponsors logo and the new Centenary club crest.
There was also new away kit, a rather luminous all bright orange affair that surprisingly went down a storm with supporters.

As for on the field events the season hadn’t started well for manager John Gamble and quickly got worse, having guided the club to a respectable 14th place in 1998/1999 after taking over from Alan Shoulder in the October hopes were high for a push for the club’s highest finish yet.
However only 2 victories in the first 9 league games had plunged the club into an early relegation battle, 4 red cards in the first 6 games didn’t help matters however the board backed their manager but after a 1-4 League Cup defeat at local rivals Gateshead things came to a head.

The result of the game wasn’t helped when goalkeeper Terry Burke had to leave at half time to attend the birth of his 1st child! and with no keeper on the bench an outfield player had to go in nets for the second half but it was the after game events that brought things to a head.
Reports of a player bust up came out and by the Friday news broke that 5 players had been released but it was hearing that fans favourite Wayne Edgecumbe had asked for a transfer straight after the Gateshead game that made fans aware there was problems within the team.
The following Saturday Blyth crashed out of the FA Cup losing 3-5 at Leigh RMI (with yet another red card thrown in for good measure it was to prove to be Andy Toman’s final game for the club anyway).

2 more defeats in the space of 7 days proved the end of the road for Gambo and he and his assistant Laurie Pearson tendered their resignations after a defeat at Lancaster on 25th September. Injured right back Michael Farrey & physio Glen Martin stood in as caretaker managers for the 7-0 League Cup victory over Whitley Bay on 28th September and 2 days later the club appointed Mick Tait as manager.
The new manager ‘feel good’ factor happened as Blyth travelled to Winsford United on the Saturday and easily won 5-0 !.

Mick Tait and his new assistant Tony Harrison steadied the ship and calmed down the dressing room unrest with Wayne Edgecumbe staying, although as expected he brought in his own players with former Hartlepool Utd midfielder Nicky Evans being his 1st signing.

In came the likes of Andy Martin, Maurice Hilton, Ian Dixon, Paul Symons and there was a return brief return for Gustavo Di Lella as the manager tried to address what thought was an imbalance & lack of shape to the side.

Results improved gradually although consistency was still missing and it wasn’t helped when Glen Robson broke his leg in a 0-3 defeat at Runcorn in October however days later Blyth recovered from the major blow of losing their star striker when they travelled to Frickley Athletic and won 4-1.
But the following Saturday Croft Park there was to witness the now rat

her infamous ‘ill tempered’ 3-4 home defeat by Hyde United. Emotions was running high after Hyde’s on loan Crewe striker (a young & up and coming) Rob Husle appeared to punch the ball into the net to seal a 3-4 victory for the visitors having recovered from being 0-3 down at one stage, tempers spilled over and both players & supporters were involved in a fracas with the Hyde players & dugout after some rather unnecessary behavior from all parties which saw both clubs warned by the league & FA about their future conduct!.

There was other horror shows, not surprisingly one being in the Northumberland Senior Cup, after gaining a hard-fought 0-0 AET draw at Croft Park Northern Alliance side Ponteland United then won the replay 0-1,  also a shock 0-1 League Cup Semi Final defeat at home to Trafford in March.

It was well into the New Year before the form settled and consecutive away victories at Gainsborough Trinity 0-1 & Leek 1-4 Town give belief of climbing the table it also coincided with the arrival of experienced players such as Brian Rowe, Jeff Wrightson, Ian Chandler, Paddy Atkinson & a return for Willie Moat.

Mich Tait finally guided the club to a respectable 15th place in the final table, although once again a Mick Tait reign in the hot seat was to feature a war of words with the board.
Tait stepped down as manager in the July citing promises he was made by the board when taking the job about funding being available for the coming season were not meet, he claimed he was promised the resources to make a challenge for the title!.

In an interview with Jeff Bowron in the Sunday Sun, Tait fired a broadside at the accusing them of a “job not fitting the description in the brochure”.

Tait claimed “I knew there would be problems when I took over, But I was told funds would be available for a crack at the title if we pulled away from the relegation zone”.
“We did that comfortably despite the players having to go without wages for several weeks but the reality is the finances just aren’t there. I wasn’t prepared to work in those circumstances”.
“They have no immediate future which is a shame as I only went to Blyth because it was a big club with plenty of tradition”

“The debt is certainly not manageable but we’re not prepared to gamble financially and the club will survive without a front man”.

Rumours of the debts being around the 20K mark and the fact that the players had gone unpaid during the season, along with the promises the club had made to Mick Tait but clearly were not able to follow through on just emphasised that there was clearly was simmering trouble within the club. Mick Tait’s resignation was followed shortly after by the clubs Chief Executive stepped down.

While a new manager was appointed in the July of 2000 in the shape of John Charlton the simmering problems were to finally catch up with the club a year later.

And as well all know the John Charlton era in charge & the events of summer 2001 is a story in itself.

The ramblings of a Millwall fan

News, Reviews & Interviews with the biggest names in Non-League throughout the North West.

Over the Wall Blog

I fancy O'Brien over the wall

The Musings of a Football Obsessed, Cycling Lawyer

The football adventures of Peter Miles

The Ball is Round

The Ball is Square
The WordPress.com Blog

The latest news on WordPress.com and the WordPress community.